Christmas comes early tonight… and by “Christmas,” i mean Food in Review! 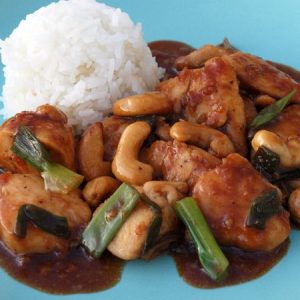 As i’ve said before: solidly delicious recipe, Cheryl-made. Try it out. 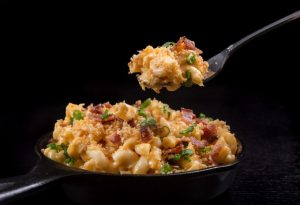 i was SUPPOSED to make carne guisada, finally, but i forgot to take the beef out of the freezer. This is the perfect “oh, fuck it” meal that you can slam together in no time, and it’s amazing. Every single week i make this and i say “dinner’s ready!” my family says “Already??” Every single time. It doesn’t get old.

i switched back to bacon after the Bad Idea Sausage from last time. Instead of stirring the bacon into the pot, i applied it like a garnish, and kept it in a container in the fridge for leftovers, along with the toasted panko.

This recipe has a massive yield. i ate mac and cheese all week, and let me admit: it does not keep well. Dries out a lot. At one point, i added a bit of water before microwave to juice it up a bit. It only kinda worked. Bit of a drag. 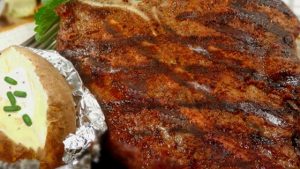 When we asked the kids, as we do every week, what they wanted to eat this week, they came out with their usual outlandish suggestions (“Unicorn meatloaf!” “Chocolate bouncy castles!”)

This week, they requested steak, and to my mild surprise, Cheryl obliged them. She picked up four gigantic t-bones at CostCo (we went on a Sunday – never, ever do this). She was delighted to barbecue in the middle of winter. Back in the condo, barbecuing was a giant hassle, and it could only be done on three specific days during July.

The spice rub on this steak was incredibly salty, but amazing. She threw some baked potatoes on the grill, and they were amazing too. 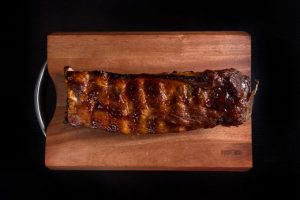 i was SUPPOSED to make carne guisada, but i forgot to take the friggin’ beef out of the freezer again.

The huge Flintstonian rack of ribs we got from CostCo was set to expire, so Cheryl compelled me to cook them up. i had looked high and low for honey garlic sauce at the grocery store, but could only find a runny-looking VH garlic sauce (in the “Asian” section, no less… weird that sauces are “Asian” if they’re not tomato- or vinegar-based).

i’ve been trying for months to make the honey garlic ribs of my dreams. i came close with these. i served them with broccoli and cheesy mashed potatoes. i actually found some legit honey garlic sauce last night on a snack run at the grocery store, so my dreams might come true this coming week wrt that remaining rack. 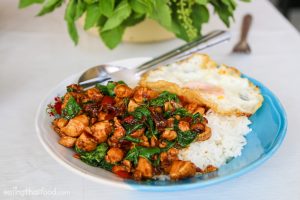 On Cheryl’s night to cook, i felt horrible and was fending off a migraine. i wound up eating this half-heartedly, lying on my side in bed. i skipped the rice.

It wasn’t very good. Cheryl likes this one, but for me, it falls in with a pile of other recipes under the heading of “boring, flavourless chicken turned light brown via soy sauce.” Even Cheryl wasn’t into it this time. 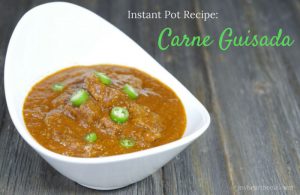 i was SUPPOSED to make carne guisada, but… i remembered to take the beef out of the freezer!

This is a Mexican beef stew that comes together in the Instant Pot, helped along by Cheryl’s miracle discovery of elusive serrano peppers, which she found in Toronto (we can’t get them at our store in Oshawa). i have had this recipe on my to-make list for months and months, and the stars finally aligned.

So how was it? Well, i really, really liked it. i wanted to serve it over dirty rice, but i didn’t have all the stuff (corn, plum tomatoes). i served it over plain basmati, but by the end of it, i wished i had eaten it in a nixtamal tortilla as a taco, because it would be GREAT in a taco. 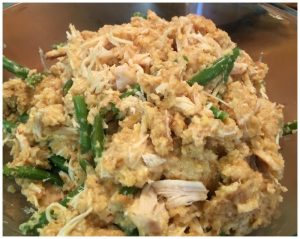 It was Saturday night. The kitchen looked like Aleppo. We looked, but none of us could locate any fucks. We were THIS CLOSE to calling for takeout.

But then, suddenly, balled up into a wad beneath a corner of the carpet, i found a single, solitary fuck. And with superheroic power, i yelled at the children to load the dishwasher while i cleaned out the Instant Pot. There was no dish soap left, but i PERSISTED, by asking a completely tuned-out Cheryl if we had any more. THREE TIMES i asked, and each time, the answer came: in a big green bottle beneath the sink. My youngest daughter searched and searched, but alas, came up each time empty-handed.

i suffered a near-defeat when, half an hour later, my eldest informed me that the Instant Pot was venting steam. i had forgotten to close the valve. Again, my hand reached out for the food-dialing phone… but NO. No, not tonight. With Herculean effort, i raised myself from my reclining chair, closed the valve, and re-programmed my alarm to alert me when the chicken would be ready.

In the second stage of the recipe, which requires opening not one, but TWO cans of soup, and dumping two bags of prefab stuffing into the pot, i discovered that while the chicken breasts had cooked thoroughly for the most part, two of them had stuck together, and where i rent them, a pink patch showed through. At that moment, i ejected my last fuck, and decided to carry through, pink chicken notwithstanding.

Then, when i went to add the green beans, i discovered that the little stemmy ends were NOT cloven off as i had hoped. With one final agonizing gesture, i RETRIEVED my last solitary fuck from the depths of the Instant Pot, co-mingled with the undercooked chicken, and used it to wash the green beans and cut their stems.

Thoroughly exhausted and pushing on dangerously into a foodless eventime, i twisted the lid onto the Pot and programmed in a further, punishing four minutes.

Just as i worried my resolve would completely break and i would buy a Dominoes Pizza franchise, the Pot went “chirp.” Dinner… HOME MADE dinner… was ready.