i had read enticing reports from weird Disney World junkies about being walked off certain rides that break down. i thought that you’d have to get pretty “lucky” for that to happen to you, or that you’d just have to go to Walt Disney World enough times for the law of averages to treat you to a ride walk-off.

Thankfully on this, my sixth and possibly last trip, lightning struck.

We were riding Splash Mountain when, just at the tail end of the Laughin’ Place section, the ride abruptly stopped. A prerecorded and in-character reassuring Uncle Remus-like voice said something like “Looks like Brer Bear is causin’ some trouble down yonder river. Sit tight, an’ we’ll be movin’ agin shortly. Ahm a harmful magic negro stereotahp.”

Almost immediately, a very NOT in-character voice of a cast member ride operator came in over the loudspeaker droning something like “this ride has temporarily ceased operations please stay seated we are investigating the cause of the disruption.”

We sat there staring at an audio-animatronic Brer Rabbit getting intoxicating “honey” poured down his throat by Brer Fox. Above the, uv-painted beehives buzzed with little bees that spun around attached to semi-invisible fishing line. It was great to get a really good look at the stuff on a Disney World ride. 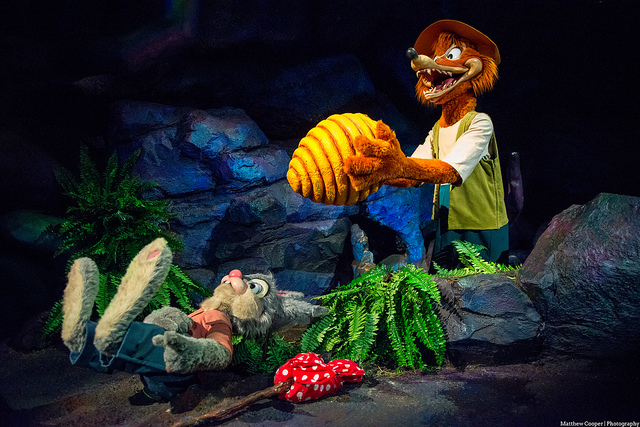 They may consider modifying this scene in light of the Bill Cosby scandal.

After the thrill of that wore off, and both the pre-recorded message and the ride operator’s message were repeated a few times, i started looking around at other aspects of the ride, like the walk-off path that i hadn’t noticed before to my right. It hadn’t dawned on me that every stretch of every dark ride had to have an easily traversable footpath in case the little cars/seashells/pirate ships broke down and guests had to be walked off the ride. i started wishing again that that would be me. But no such luck … after a short time, the ride operator announced “this ride will resume immediately.” And it did, making me wonder why the announcement had even been made. Is that to reassure riders, in case you think the ride has started again on its own, without the careful monitoring of a minimum-wage employee? Is that to put your fears of a log flume highjacking to rest “Nobuddy moves: veer taking thees fiberglass elephant to Frontierland.”

Who You Gonna Call? Maintenance!

i felt a little lucky that we got to experience a ride stoppage, but then it happened again on the Haunted Mansion ride. It was the same story: an in-character announcement came on in our doom buggy: “Blah! Something about naughty ghosts sabotaging the machinery!” followed by a disillusioned college intern: “Ride’s not working. Everybody relax.”

In fact, the Haunted Mansion ride stalled on us both times that we rode it, and in the exact same place: overlooking the ballroom. This was super-great, because there’s a lot to see (and a lot to miss) in that scene, and we got a really good look. The ride stalled long enough the second time for me to carefully explain the Pepper’s Ghost illusion that made the scene possible, which had proven too difficult to describe earlier in the day over terrible cheeseburgers. 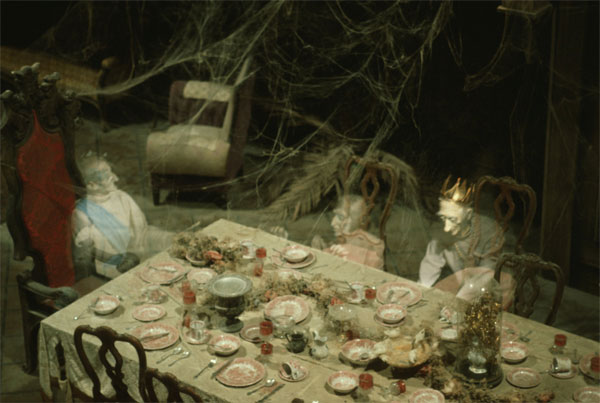 The second time we rode Splash Mountain, the ride stalled again. What had seemed like a rare and lucky moment had now made me wonder whether the entire park was crumbling around us. This time, we stalled out after the Big Drop at the climax of the ride. The flume was in an exterior section of track (thankfully it wasn’t raining), so there were no animatronic bunnies to stare at. There were good-natured fellow riders to crack jokes with, so it was all good. i identified the footpath to the left of our log, and started getting excited again for the chance at a walk-out. 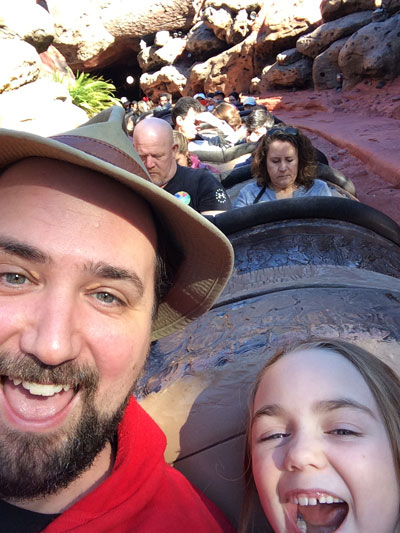 These Flip-Flops Were Made for Walking

Sure enough, after we’d sat cracking wise in our logs, an unenthusiastic cast member announced that the ride was out of service, and they’d have to walk us off. VICTORY! It took a really long time, as they had to empty each log one by one, and i could understand that from a cast member’s perspective it’s an absolute bummer, but i was as giddy as a schoolgirl. (i know this, because we shared a log train with a number of giddy schoolgirls.) 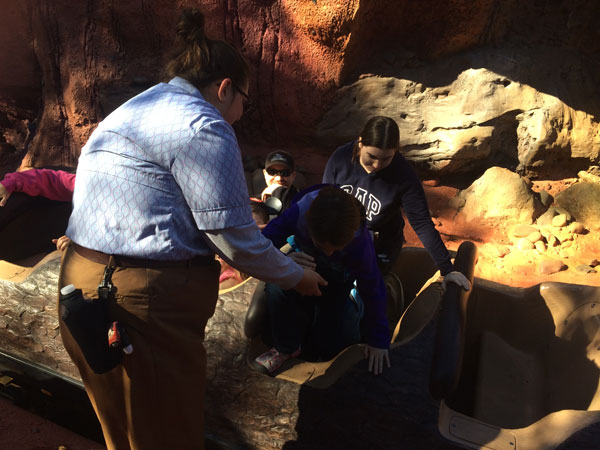 A cast member helps my wife and child out of their log and onto the emergency exit path.

When we finally started walking off the ride, i began taking pictures like Splash Mountain was drunk and climbing out of a limo without panties. Here are some of my snaps: 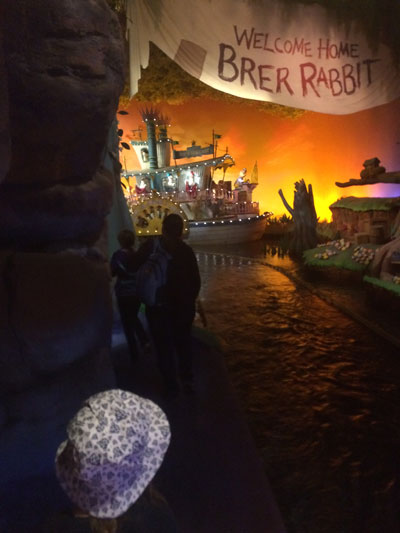 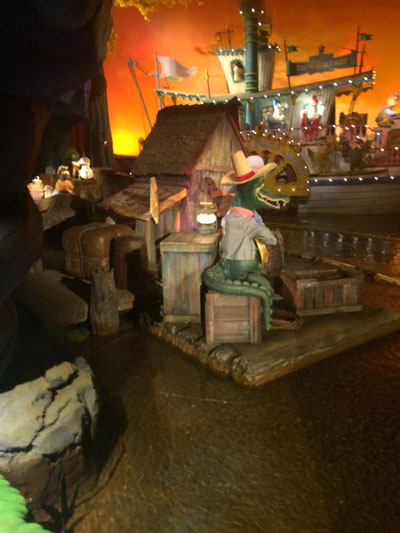 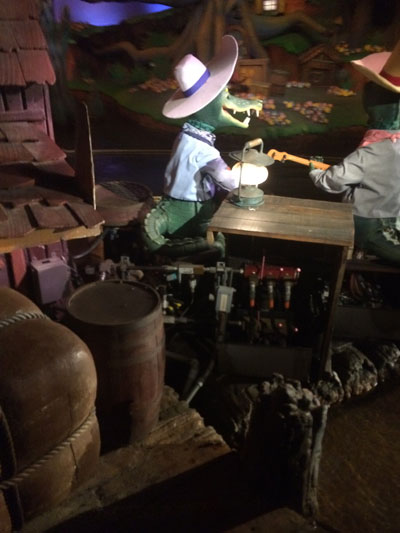 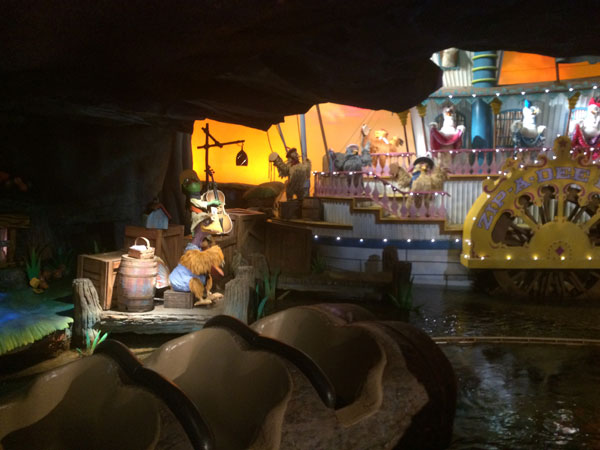 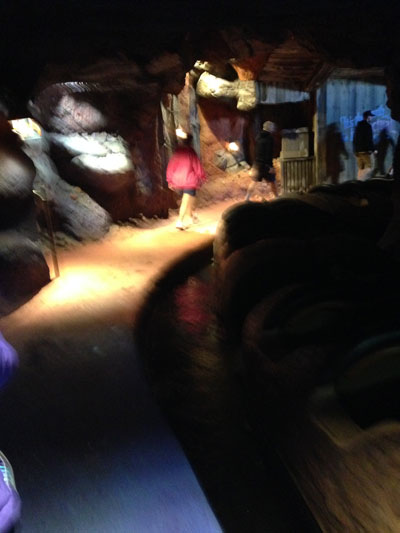 The coolest bit was when they walked us through a behind-the-scenes area where a mechanic was repairing a broken log. i took a couple of pics so i could gawk at them later. 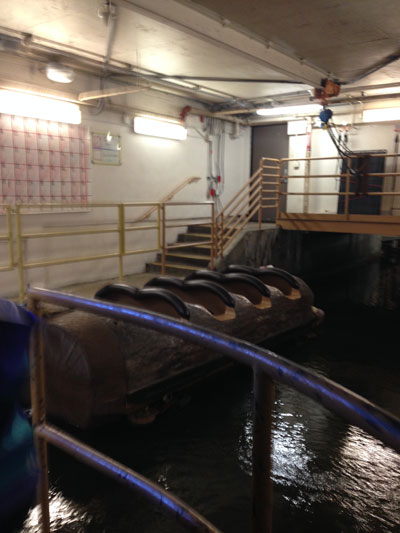 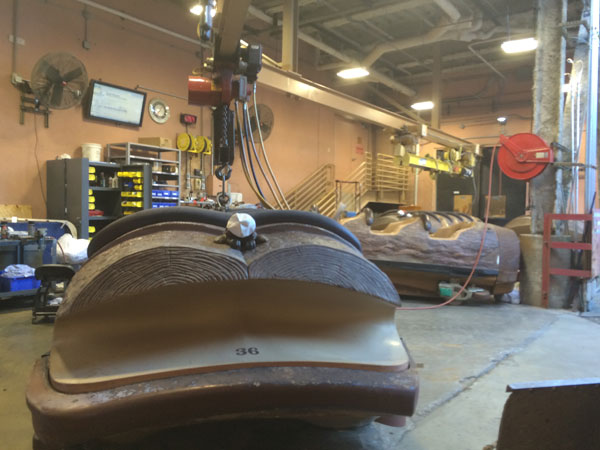 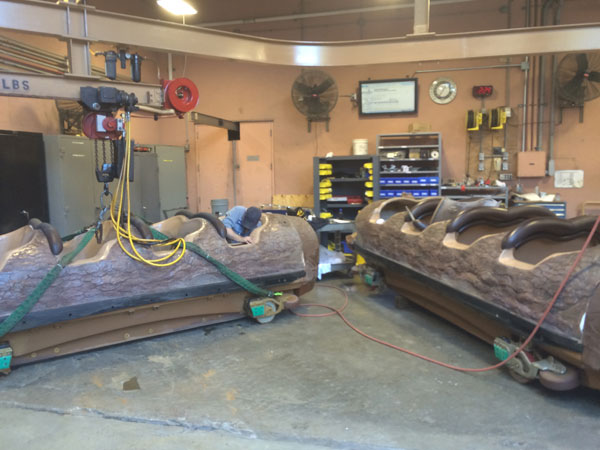 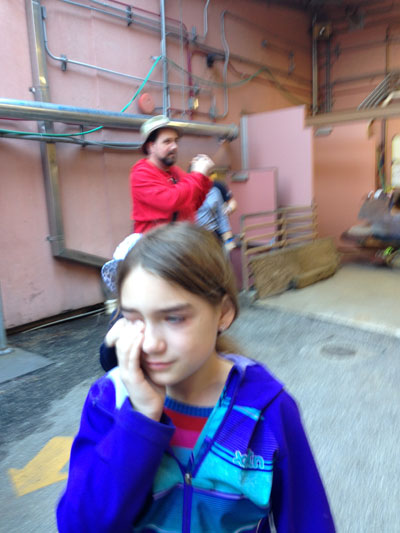 My eldest wipes magical tears from her eyes as the illusion fades.

i didn’t hear it myself, because i would have slapped her to infinity and beyond, but my wife reported that on the way out, a snarky cast member said “please don’t take any pictures … (we only told you a million times) …”

i’m sure she may have said it a million times, but she said it a million times once, individually, to each of the million-odd guests parading out the back exit, and this was the first time we heard the request. And i didn’t even hear her. And she was telling people not to take pictures at the end of the walk-off, when there wasn’t anything left to take a picture of aside from her salty face. So please, enjoy my walk-off pictures in the spirit of fun and discovery and of not being a poohead.

The cast members begrudgingly handed us each a Fast Pass ticket to any ride in the park, with the attitude of a magician whose trick has failed miserably in front an entire theatre full of people.

We had done it. We had beaten Walt Disney World. We were victorious.

NEXT: On Smiling and Saying “Bored!”

PREVIOUS: On the Illusion of Food

10 Treatises on Walt Disney World: On the Magical Veneer Flaking Off