For ten years, since our eldest child was born, my wife and i have wanted a family vacation in Walt Disney World. We didn’t really question why, but as our two daughters were growing up, i very consciously exposed them to All Things Disney, so that they would have an appreciation for the place when we finally arrived. i know many forward-thinking commentators have a lot to say about the cultural and sexual politics in Disney films, but you really can’t touch those flicks for their sheer quality. Stack any animated Disney feature up against The Swan Princess, Balto, or Bartok the Magnificent, and the difference is clear: it’s like choosing The Adventures of Shark Boy and Lavagirl 3D over one of the Marvel Cinematic Universe movies (which are now owned by Disney, incidentally). 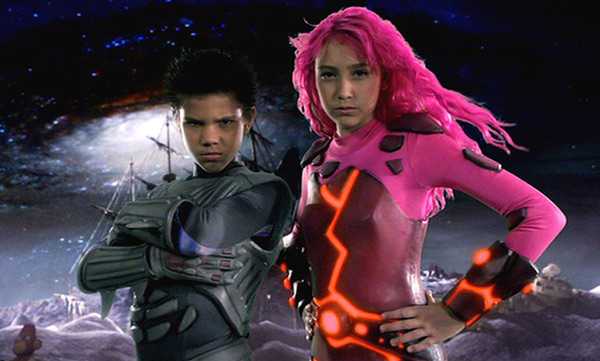 Sharkboy and Lavagirl were gifted from a very young age with the power of 1980’s-era blue screen.

The problem with a Disney World vacation is that it’s 1) expensive as gold-dipped diamond sprinkly balls and 2) see point 1. i had left my full-time job as a video game developer in 2007, just after the birth of my eldest daughter, and then tried to n00btrepreneur my way through the Great Recession. By the time my kids were the perfect age to visit Walt Disney World (still capable of wonderment, but long-legged enough to walk around an amusement park for an entire day without having to be carried), our family was beyond flat-ass broke. We were in debt to our eyeballs, and were rapidly outgrowing our tiny Toronto condo, without the means to purchase a larger place somewhere else in the city. There was no hope of ever taking that trip to Disney World.

Our family, circa summer 2015. (That’s grandma in debtor’s prison.)

My wife Cheryl had been to Disney World once in her life, when she was 14. It struck me as a little long in the tooth, but she credits the trip for some of her happiest childhood memories. Her parents weren’t wealthy either, and wound up re-mortgaging their house to fund the trip. i sat there looking at our dire finances, at our backs-against-the-wall position, and contemplated doing something equally rash to get us there. Finances, after all, go up and down. Your kids are only 7 and 9 once in their lives.

Thankfully, circumstances conspired to jockey us into a better financial position. We offloaded our condo and bought a house in the suburbs at a discount from a family member. i folded my zero-growth business and took a full time job. Then i got a raise. Our tax refunds came in. i bet against myself in that shirtless pit brawl against Tygo the Furious and threw the match. Our stars aligned at exactly the right time, and there we were, dropping [an undisclosed but disconcerting amount of] dollars at our supposed dream vacation.

It wouldn’t be my first trip around the park in a fantasy choo-choo. This would be my sixth time at a Disney park. My past trips included visiting Epcot in its opening year with (if i remember correctly?) my first stepfather, who wound up physically abusing me. i took a late-day trip to California Adventure on some video game company’s dime and got bullied for working at YTV by some guy who worked at SPACE.

Another trip had been in my grade 12 year, when a friend and his family took me down to Florida by RV. The trip was difficult because my friend’s baby nephew, who came along, had recently become screechingly autistic, and i had recently become boneringly infatuated with my first-ever girlfriend. i spent great swaths of the trip writing a travelogue for her, ignoring my friend, and giving his mom sage advice on how to deal with a (what did you call the condition again?) autistic child. The way in which i conducted myself on that trip remains one of my great regrets in life.

But it didn’t matter: this was going to be entirely my trip to Disney World, on my dime, with my family, and we were going to have our own weird messed-up family stuff to deal with.

And so began our Disney World vacation.

NEXT: On the Games People Play