Walt Disney World is all about fantasy, and the food is no exception. Nowhere else can you be left wowed and starry-eyed by the magical concept of eating delicious food (that isn’t actually food) than at Walt Disney World. 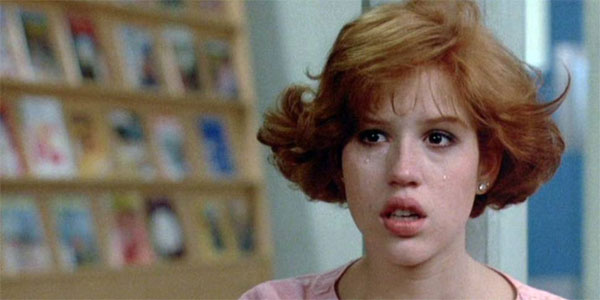 “I had the … the chicken nuggets.”

But How Does it Taste?

Let me be frank: the food at Walt Disney World is awful. It’s comparable with the 7-Eleven snack counter, except not on a good day, when the chicken cheese taquitos have been freshly made, and the hot dogs haven’t been rolling around on that wiener rotisserie for a week. Walt Disney World food is like the 7-Eleven snack counter on a bad day, when an employee realizes he’s left a crate of “refrigerate after opening” neon nacho cheese out on a skid in the back, and that rats have pooped in it. Not nice rats, like the well-groomed ones you’d find at a pet store, but low and degenerate rats, like the kind you’d find skulking around an adult movie theatre even when that evening’s lurid feature has become available on home video and there’s no good reason for those rats to even be there. And not nice poops, like the tidy little piles that look like leftover kernels of long-grain brown rice that you tragically pop in your mouth while you’re cleaning the kitchen, but foul and inappropriate poops, like the kind that are really difficult to squeeze out, so that the veins in their little rat heads pulse and throb as they squirm around uncomfortably, perched on the edge of that can of spoiled nacho cheese wishing they had eaten more fibre earlier that week. And then someone comes into the store and orders the beef & bean burrito, which is ten times nastier than what was about to befall those nachos.

i’m going to stop splitting hairs here: Walt Disney World food is not very good at all. In Fantasyland, my wife and my eldest daughter each ordered a “turkey leg.” MY wife had been bothering me all day about getting one, and she had been excited the entire week prior at the very prospect. The “turkey leg” was a ghastly eleven dollars or something (twenty bucks with the abysmal Canadian exchange rate), and from the moment the girls bit into their “turkey legs,” i could tell something had gone horribly wrong. It’s like that uneasy moment in mystery movies just before Lord Wealthypants collapses face-down in his soup because he’s been poisoned. 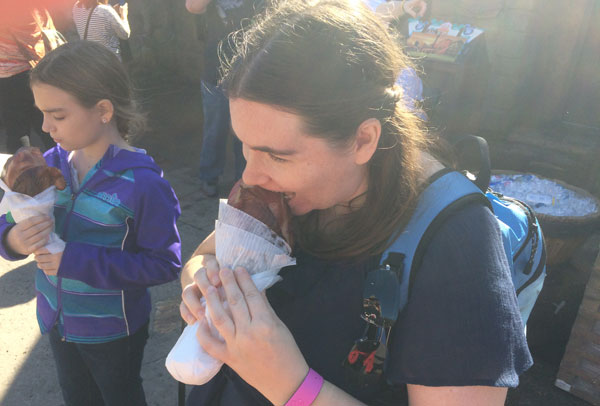 The love of my life bites into a “turkey leg”, while i make no attempt to stop her.

The “turkey leg,” although cooked, was beet-red and salty as a sailor’s balls. The consistency of the meat was nothing at all like fowl. The ladies walked around the park gnawing at their “turkey legs” before my wife finally gave up. Deliriously hungry, she spoke her worst fears into being. “i don’t think this is turkey,” she confessed. “i think it’s ham.” Doubting her, i took a few bites. It did, indeed, look and taste a whole lot like ham than turkey.

They threw out their “turkey legs” and picked at my plate when i ordered fish n’ chicken n’ chips (a culinary classic[?]) later that afternoon. The thought of the incognito ham bothered me all week long, and later, when i was desperately searching for the “best” food options at Walt Disney World (which is much like scouring the globe for the world’s tallest midget), i learned that Fantasyland did once sell ham shanks instead of turkey legs. i began to wonder whether they weren’t hawking hocks instead of legs, and just hadn’t bothered to change the sign back, and i was honestly outraged by the very idea of it (“What about Muslims??” i raged, showing perhaps for the first and last time in my life a modicum of care about what Muslims ate.)

i was so bothered by the turkey leg incident that following our vacation, i was actually looking for complaint forms on the FDA website. i decided to actually look at pictures comparing turkey legs and ham hocks to make sure i wasn’t wasting anyone’s time. As it turns out, the thing my wife and child were eating was, probably, a turkey leg … a turkey leg processed and salted within an inch of its life, but a turkey leg nonetheless … but the fact that i had to go all CSI on it doesn’t constitute very high praise.

Yeah, But What Did You Think About the Food?

i’m not certain i’ve made my point clear: the food at Walt Disney World is subtly lacking. We purchased the Dining Plan that WDW offers, in part to save ourselves from the sticker shock of the outrageous prices. They offer a few different plans, including a fatty-go-blatty plan, which i don’t recommend. We had some trouble getting through all of our dining plan credits, except when a miscalculation saw us skipping lunch on the last day. 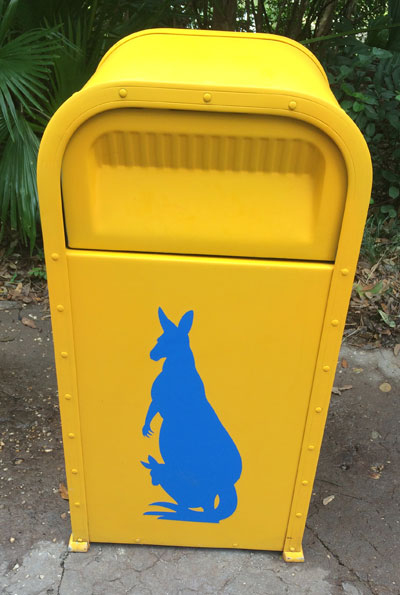 This is where you throw out any bits of kangaroo that were too gristly to choke down.

The “rules” of how your Dining Plan credits apply vary wildly from restaurant to restaurant, and some places have different contracts and arrangements with Walt Disney World, none of which is transparent to you as a hungry guest until you show up and try to order something. We found the best plan of attack is to be up-front and say “i have a dining plan. Which things can i eat?” at every single eatery. Just be prepared to hear Floridians brutally mispronouncing “entree” all week long.

Here are some quick picks for the best and worst food places we tried on our vacation, keeping in mind that “best” is slightly worse than the worst thing you’ve ever eaten. 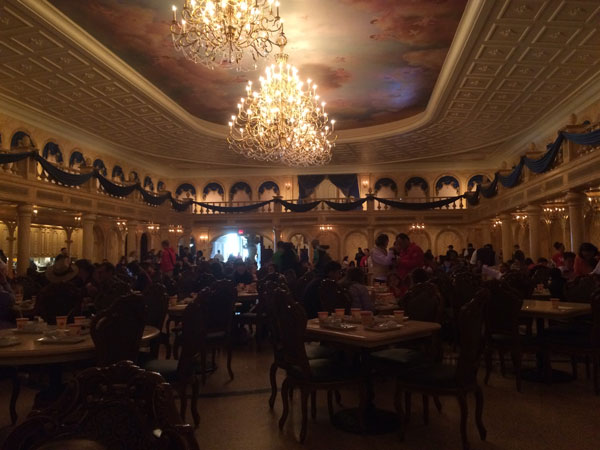 It’s just like the movie, except it’s dimly lit and packed with throngs of sweaty tourists drinking nine dollar Cokes. 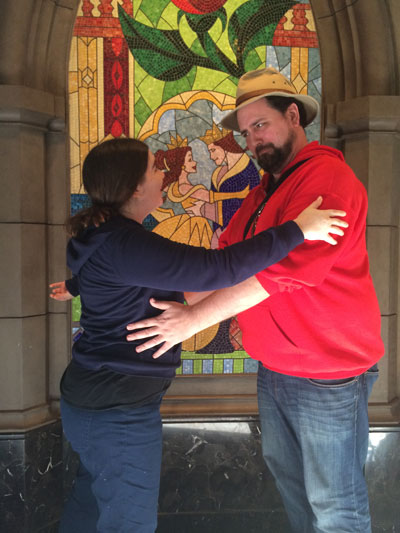 i love you so much that i’m willing to choke back this diarrhea tsunami long enough to take this picture.

NEXT: On Walking Off the Mountain

PREVIOUS: On Being Taken for a Ride

10 Treatises on Walt Disney World: On Being Taken for a Ride