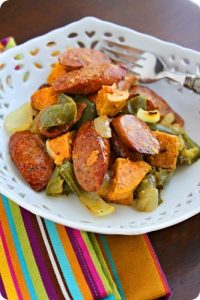 This one is a definite keeper. Cheryl made it, and she says it was easy to prepare. i loathe sweet potatoes, but they were tolerable with a mouthful of sausage. Marc Angelo makes some killer sausage … you can get their stuff at Loblaws-and-affiliates stores. We used mild Italian for this, but we’ve also had their chorizo, cheddar and bacon, and honey garlic flavours, and they’re all good. Nipples and eyeballs never tasted so good! 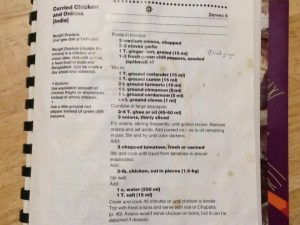 For the first time in the many weeks since i started this recap, i made a recipe that one of you suggested! Sarah St Pierre showed me this curry recipe, and then Susie Lukhbinder Jagdev chimed in about how it was all wrong, and made modifications. i brewed it up according to instructions from both ladies (one who has the cultural edge, one who doesn’t … surnames should provide a clue).

Pureeing the onions seemed to be the big difference between Ryan’s Terrible Curry Failure and Something You Might Actually Get at an Indian Restaurant. Some of the instructions were unclear … like how “dark” is a pot full of pureed mush supposed to get? The pot i used was too large, too. i used a food processor instead of a blender. Susie told me to add far less spice, to use a masala mix instead of individual spices, and to add the spices at the END of cooking rather than the beginning, which seemed the weirdest instruction of all.

My daughter chums around with a Pakistani girl at school, and i asked the girl’s mom about that, and she looked at me like my face was on fire. “No, no, no … beginning,” she clarified. Get your shit together, Asians.

This curry was good, and i am proud to say that my botched-curry curse is finally broken with this recipe. HOWEVER, the drawback is that out clothes and skin smelled like those onions it for days afterward, and i worry that i brought down the resale value of my house. But still: tasty.

Why?? Decent meals for two days. We were doing SO WELL! 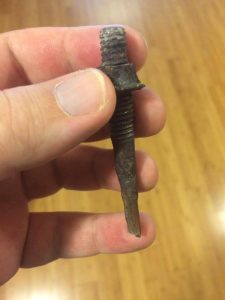 It’s because of this little 400 dollar bastard, which popped my tire, and put me at the dealership all morning, and i missed my window of opportunity to throw dinner into the crockpot (see below).

We use pre-shredded Mexican cheese for maximum laziness, and top the nachos with seasoned beef, olives and feta. But who cares. 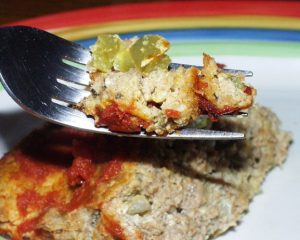 Cheryl put this together. It’s just a classic, ketchup-topped turkey meatloaf, the recipe for which you can find anywhere. They vary only slightly. Something went weird this time, because it wound up really wet. Too much water, likely. Better as dried-out leftovers the next day for lunch. We steam broccoli with it, and i have timed it out at 5 minutes for perfect results. Cheryl steamed it for 5 and removed it from the heat, but forgot to take the lid off, so the broccoli was grey. i like the kind of cooking where i can get a predictable result with a to-the-second atomic clock, and am looking forward to being able to shave entire MINUTES off that with my new pressure cooker (mentioned later). 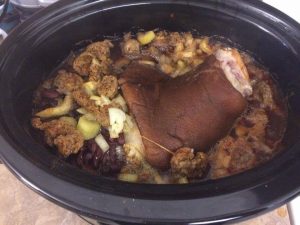 Or peas n’ rice, if you’re West Indian, which i’m not, and whenever you say “peas n’ rice” to someone who doesn’t know, they think you’re putting Jolly Green Giant green pod peas into rice, and they say “no thanks.”

This is another recipe that i’ve never been able to nail. i’ve made it a bunch of times, and it’s been almost literally “put beans and rice in a pot. Wait 20 minutes. Serve.” Tremendously bland. So this one had sausage and a whole ham hock (whaever THAT is), and i thought it might be promising.

Here’s what a ham hock actually is: a big chunk of uncensored pig leg, skin on, bone-in, looking like it’s straight out of a Flintstones episode. The thing was huge, and explicit, and took up most of my crock pot. i honestly had no idea what to do with the skin. Jeff Kolesnikowicz told me to throw it out or feed it to my non-existent dog, and i thought he meant the whole shank.

After 8 hours in the pot, the skin came off no problem, and i almost couldn’t remove the hock without dropping knuckles and hip joints back into the pot because the whole thing was fally-aparty, and i never prefer “choking hazard” as a feature of my food. i shredded the ham with two forks, which always takes me an eternity, and put it back in the pot. There was so much meat that the recipe would better be described as “Pulled Pork with Bean Garnish.” i served it over rice.

The big problem with the peas n’ rice recipe is that they had me add kosher salt, and Jews don’t mess around with their salt: this shit was some blessed-by-God, Dead Sea salty-ass salty salt. The hock was already smoked, and from what i understand, a lot of salt goes into smoked, cured meat. So basically, our evening became this Kids in the Hall sketch:

Cheryl and i had a kid-free night, so we grabbed some takeout, watched a couple of movies, and did some online Christmas shopping. After moving from Toronto last year, i was worried we wouldn’t be able to find good restaurants with food from different cultures in Oshawa, but i was delighted to find that all the bases were covered: Indian from Spicy Affairs and Mr. Maharaja, Mexican from The Hound and Mexico Lindo, and southeast Asian from (the horribly named) “Azian“. (Is that a restaurant name or an XBox Live handle?)

i like the gluten-free Singapore vermicelli, no shrimp. Cheryl likes their Basil Chicken. Everything they do is great. 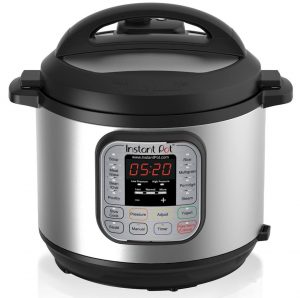 Last night, i bowed to peer pressure, and at Lisa Bradley’s suggestion, i bought an Instant Pot pressure cooker. Turns out, Cheryl was already planning to buy me one for Christmas, so it’s kismet. i’m spending the day reading recipes for it. We’re gonna have a tough week, with something going on at exactly dinner time every evening (two Christmas concerts, two dr appointments, and my monthly meeting of Funny Good-Looking Guys that Everybody Loves), so i hope i can effectively plan food around the chaos.

Got any booze and cocaine-free recipes to share? Show me, and maybe i’ll get around to making them seven weeks from now!