i created a little puzzle hunt for my two girls (ages 8 and 10) to complete on Christmas morning, before opening their big gangbusters mom-and-dad-spent-too-much-money presents. i spent a few evenings stealing artwork from the internet and putting together five postcard-sized puzzles for each of them.

The 10-year-old’s present was more challenging to hide, since it was larger. We have a couple of couches in the living room that i could stash them behind, but it makes for ambiguous puzzle solving: if the answer is “couch,” it’s a little too vague. We have many couches.

So my wife wrapped the present, and we put a tag on it that said “SCOTTIE L.” We have a friend named Scotty L., and pretended the gift was for him. Ordinarily, i would never spell it “Scottie,” but the puzzle called for an 8 letter answer (as you’ll soon see).

The Game is Afoot!

With the final hiding places decided, i worked backwards to develop puzzles that would move the girls alternately between the main floor and the basement. But their first stop on Christmas morning was to the mailbox, where they found this postcard: 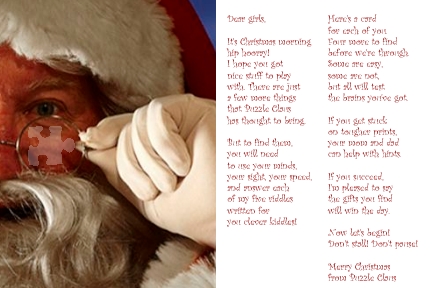 CAVEAT: Professionally, i would never stoop to using a font like Curlz MT, but it seemed like a decent fit here.

Here is the text on the postcard, in case you aren’t eagle-eyed:

It’s Christmas morning
hip hooray!
I hope you got
nice stuff to play
with. There are just
a few more things
that Puzzle Claus
has thought to bring.

But to find them,
you will need
to use your minds,
your sight, your speed,
and answer each
of my five riddles
written for
you clever kiddles!

Here’s a card
for each of you.
Four more to find
before we’re through.
Some are easy,
some are not,
but all will test
the brains you’ve got.

If you get stuck
on tougher prints,
your mom and dad
can help with hints.

If you succeed,
I’m pleased to say
the gifts you find
will win the day.

Alongside the postcard were two red envelopes — one for each girl — with “1/5” written on the front.

Here are the five puzzles my eldest received, in order: 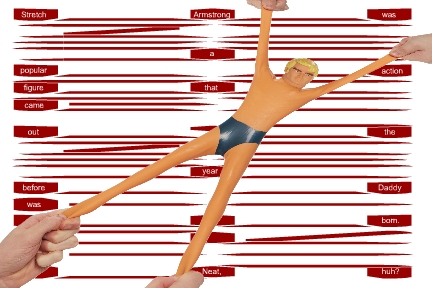 One problem with the puzzle hunt is that since i designed it backwards, the difficulty ramped up slightly as i went… which meant that the whole hunt started hard, and ended easy. My eldest had trouble with this puzzle, and even when i explained the solution, she had trouble reading the answer. Part of that is font choice, i think, and another aspect is that the Stretch Armstrong image blocks the answer a little too much.

The answer led her to a piece of fitness equipment in our basement. 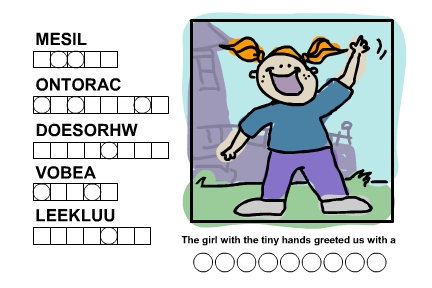 This is a standard Jumble puzzle like you’ll see syndicated in newspapers. She needed a few hints like “this is a proper noun” and “come on… how many words do you know with two U’s, two L’s, two E’s and a K??” (My daughter takes ukulele lessons every Tuesday.) She was nervous about anagramming the result to find the answer, but i had arranged it so that she just had to take the circled letters in order. This was (amazingly) the only puzzle with an error in it (one of the words has an extra blank square). 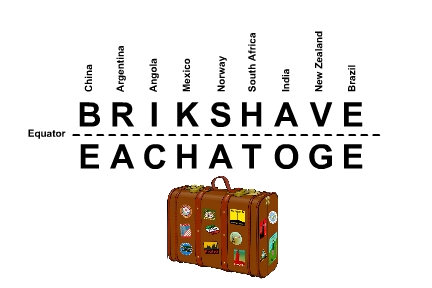 One of the presents i bought for both girls was a talking globe, which i had them open before the puzzle hunt. i made sure that each girl had one puzzle that required her to use the globe.

The answer refers to a Muppets playset that i have on display in the basement. The next envelope was hidden under the set. 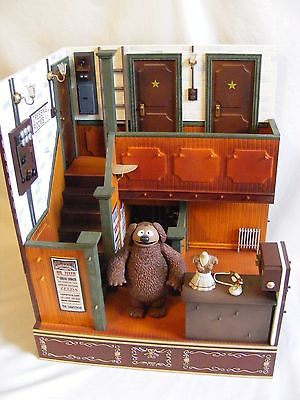 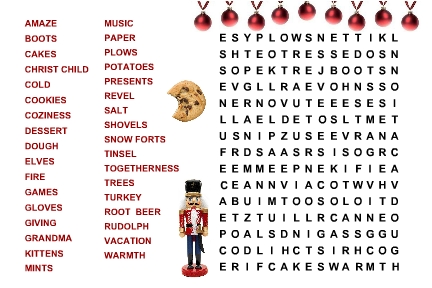 The penultimate puzzle for my eldest daughter led her to a book in my sheet music collection, where her final envelope was waiting. 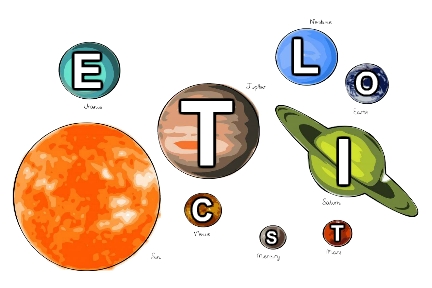 i had recently taught my eldest daughter a mnemonic device to remember the order of the planets. Each planet has a letter on it, which is why the solution had to be 8 letters long (hence my atrocious spelling of “Scottie”). When she completed the puzzle, she looked at me and said “Wait… so that’s my present.” i nodded. She opened. It was neat.

My youngest daughter generally lagged behind by one puzzle. Each girl got a word search, which slowed them down. Here were her puzzles: 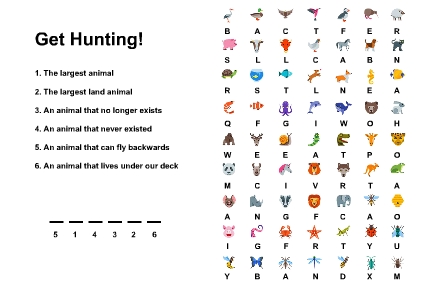 She got tripped up a little by the fact that the letters had to be written in a different order than the one in which she found them. i did it that way so that she wouldn’t brute force the puzzle, but in hindsight it was an unnecessary precaution.

The answer to this puzzle is the name of our hamster. The next envelope was hiding under his cage. 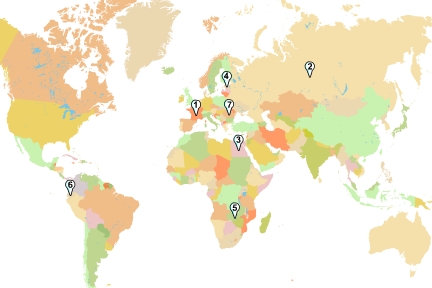 This was the globe puzzle for my youngest. It was a little challenging… i needed a few countries that began with “E,” and they tend to be quite tiny, so it was a challenge to spot them on a little 4×6 postcard. She got through this by finding the general area on the globe (Africa and South America were constantly tripping her up!), and i would point out which specific country the puzzle referred to. 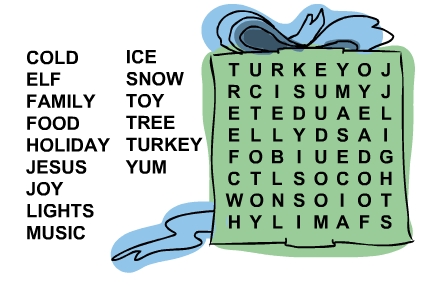 Her confidence came back once she saw a familiar puzzle type. She took this one on like a boss. The answer led her to a board game in our basement; the next envelope was hidden inside the game box. 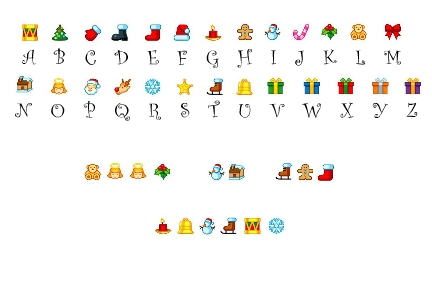 i was a little nervous that she would destroy the _ _ _ _ _ _ trying to get her next envelope out of it, but she succeeded thanks to her tiny hands! 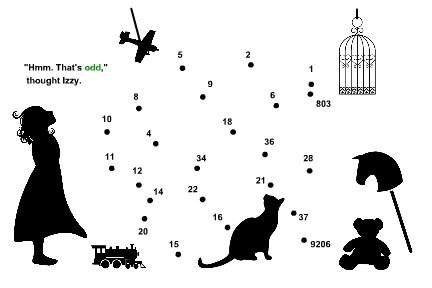 Mommy needed to give our youngest a little bit of help figuring out the “trick” to this connect-the-dots puzzle, but when she discovered the answer, she made a mad dash for the hiding place and found her present.

He Confounds You When You’re Sleeping

i was really worried that this puzzle hunt would cause a mutiny in our household, with wails of “caaaan’t we just open our presssssssents?????” Admittedly, there was a tiny bit of that, but the girls settled into their puzzles without too much protesting, especially when they saw they wouldn’t be hung out to dry, and that Mom and Dad would be really generous with hints.

The end result was a Christmas morning where i had a chance to fully awaken before it was all said and done, and we shared a few beautiful and quiet moments curled up on the couch with our kids, as they contemplated these puzzles and interacted with us. It slowed Christmas morning right down, which is exactly what i was hoping for.

The next day, we asked the kids what they thought of Puzzle Claus, and if they think he should visit again. While neither kid answered too enthusiastically, they both said “Yeah. That’d be okay.”

How to Get Your Kids to Eat Spicy Food