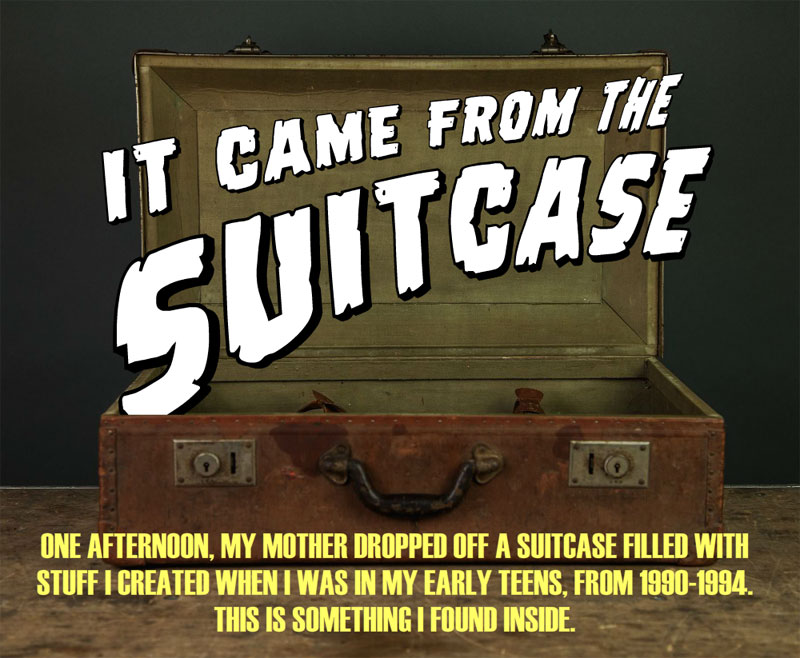 This afternoon, my mother dropped off a suitcase full of letters, stories, poems, scripts, comics, and game designs from my tender junior high through early high school years. It’s a real time capsule full of some painfully embarrassing gems. Here’s one.

It’s a letter i wrote to anybody at LucasArts (née LucasFilm), a game dev team i idolized, but particularly to Ron Gilbert, the designer of what i would later realize was my favourite video game of all time, The Secret of Monkey Island 2: LeChuck’s Revenge. The letter is dated 1993, the year after Monkey Island 2 came out. (click to embiggen each image) 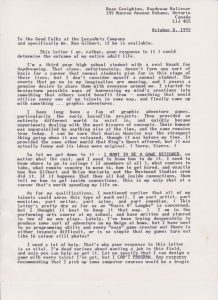 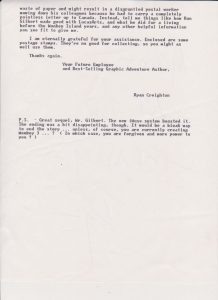 To the Good folks at the LucasArts Company and specifically Mr. Ron Gilbert, if he is available.

This letter ( or. rather. your response to it ) could determine the outcome of my entire adult life.

I’w a third year high school student with a real knack for daydreaming. That alone, unfortunately. doesn’t form any sort of basis for a career that normal students plan for in this stage of their lives. But I don’t consider myself a normal student. The events that go on in my imagination are amazing, and I posess a genuine desire to share then with everyone around me. I started to brainstorm possible ways of harnessing my mind’s creations into something that others could benefit from – something that would utilise every one of my talents in some way. and finally came up with something … graphic adventures.

I have long been a fan of graphic adventure games, particularly the early LucaslFilm projects. They provided an entirely different world to exist in, and quickly became experiments dealing with the west bizarre of concepts. Their humour was unparalelled by anything else at the time, and the same remains true today. I can be sure that Maniac Mansion was the strangest thing going when it was released, though it was before my tine. It provided the same other world that King’s Quest offered, but it was actually funny and its ideas were original. ( Sorry. Sierra. )

So let we get down to it – I WANT TO BE A GAME DESIGNER, no matter what the cost, and I need to know how to do it. I need to know where to go to college ( if anywhere at all ), what courses to take, what remote country to wove to, how to get hired. and exactly how Ron Gilbert and Brian Moriarty and the Westwood Studios crew did it. If it happens that they all had inside connections, then tell one how to get inside connections. This is my only shot at a career that’s worth spending my life on.

As for any qualifications, I mentioned earlier that all of my talents could serve this type of work well. I am part artist, part musician, part writer, part actor, and part comedian. ( this letter’s pretty dry as far as an “Oasis O’ Laughs” is concerned, but I thought it best to keep it that way. I am in the performing arts course at my school, and have written and starred in two of my own plays. Lately. I’ve been trying desperately to produce some sort of adventure on my Amiga at hone, but I have next to no programming skills and every “easy” game creator out there is either insanely difficult, or is so simple that my games turn out like 16 colour still photos!

I need a lot of help. That’s why your response to this letter is so vital. I’w dead serious about wanting a job in this field, and only you can help me get it. Let me specify that I can design a game with every talent I’ve got, but I CAN’T PROGRAM. Any response recommending that I pick up some computer courses would be a tragic waste of paper and might result in a disgruntled postal worker mowing down his colleagues because he had to carry a completely pointless letter up to Canada. Instead. tell me things like how Ron Gilbert made good with LucasArts, and what he did for a living before the Monkey Island years. and any other helpful information you see fit to give me.

I am eternally grateful for your assistance. Enclosed are some postage stamps. They’re no good for collecting, so you might as well use them.

P.S. – Great sequel. Mr. Gilbert. The new iMuse system boosted it. The ending was a bit disappointing, though. It would be a bleak way to end the story … unless, of course, you are currently creating Monkey 3 … ? ( In which case. you are forgiven and more power to you! )

i’m not sure if i ever sent this letter, but it wouldn’t be the last time i would try to contact a LucasArts designer. i discovered a similar letter to David Fox that i wrote to him when i was in college.

Back… to the Future!

This letter is really neat if you know everything that came afterward. i did become a game designer, and i did learn to program. i did make some graphic adventure games (i’ve made about seven or eight of them by this point). And because Ron is so giving of his time, i actually got to sit down with him and ask him all about the good old days, and his motivations, and his process, and what was up with that agonizing MI2 ending. (He even playtested my game, briefly. And then he apparently rage-quit, complaining that he couldn’t find the only pick-uppable object in the first room.)

i chased down a number of the LucasArts designers under the guise of asking them to sign my original Monkey Island 1 and 2 game boxes (which they all very graciously did). i talked Tim Schafer up at a Double Fine Adventure/Broken Age party one year (AND he had heard of me, AND had played my game! Holy crap!)

i had a brief but exhilarating chat with Brian Moriarty, whose game LOOM i absolutely revered. i think David Fox actually wrote back to me in college, when i was having a hard time. And David Grossman was unbelievably lovely and genuine and, if you can believe it, actually forwarded me the job posting for the creative place where i work today. What a top-tier bunch of gents.

Ron, David, and Gary Winnick (who i haven’t met, but i’m sure he’s just awful… there’s one in every crowd) recently released a classic point n’ click adventure game called Thimbleweed Park. One of the game’s characters is a young woman who, like me, was desperate to get a job at Mucus Flem (that’s like LucasFilm. Do you get it? DO YOU??) Naturally, she had two key advantages over me: she could program, and it was 1987. 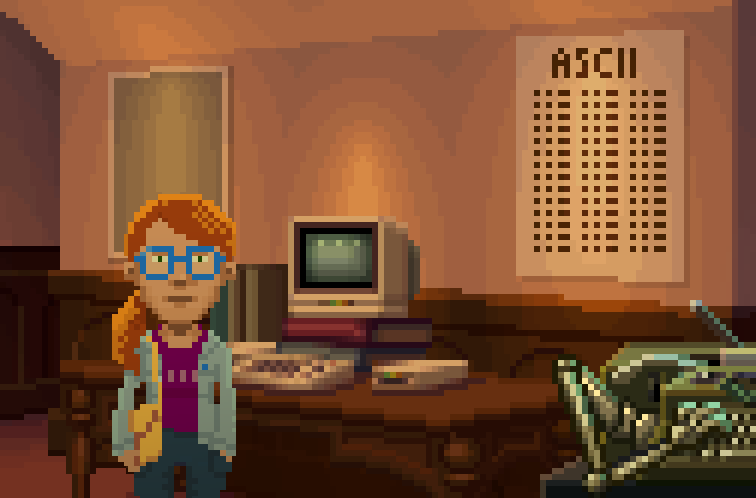 (She also had a rich uncle who could buy her a computer.)

Heartwarmingly, both of us made our dreams come true.

And i can’t find all the pick-uppable objects in Ron’s goddamned game.