The Return of Puzzle Claus

Last night, we heard the clippity-clopping of Morse code on the rooftops, which could only mean one thing: Puzzle Claus was making his rounds again, delivering presents to the world’s cleverest boys and girls.

Feedback from last year’s inaugural visit from Puzzle Claus suggested that his puzzles were a little too challenging, so this year, i have it on good authority that ol’ PC made sure not to spend more than ten minutes developing each puzzle. The little girls were greeted on Christmas morning with two red envelopes and another poem from the jolly encryptor: 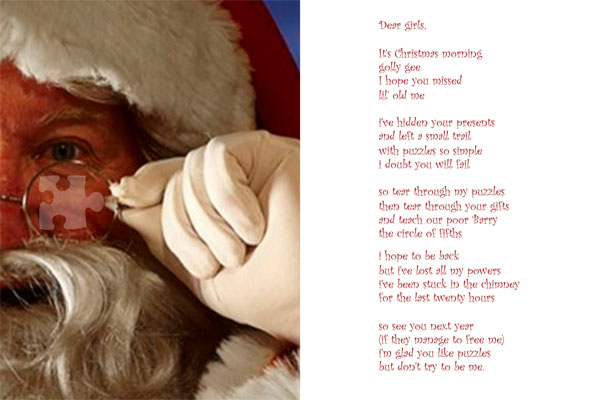 Each girl had a 5-puzzle chain to solve. Each puzzle’s answer led them to a location in the house where a new envelope was hidden. This was Izzy’s chain: 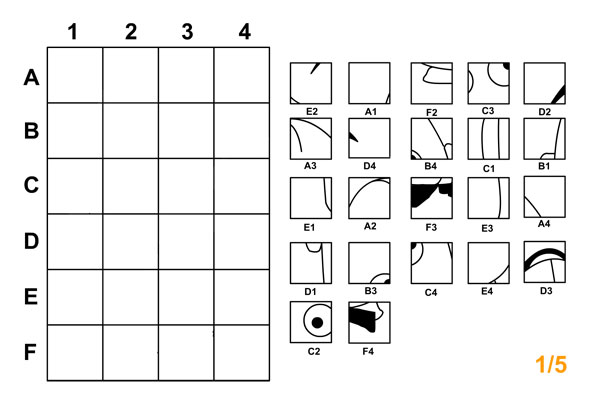 This is a puzzle type i borrowed from those Dell/Pennypress puzzle books. You have to draw the images in the squares into the grid to create the picture. In those puzzles, the image is usually high-contrast and drawn in a certain way so that it’s not easy to guess what the image will be, but Izzy cracked this one after drawing a few squares. We have a zombie Whatnot muppet in our basement, and her next envelope was tucked up inside. 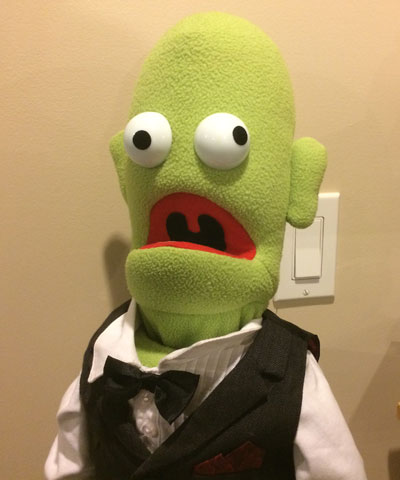 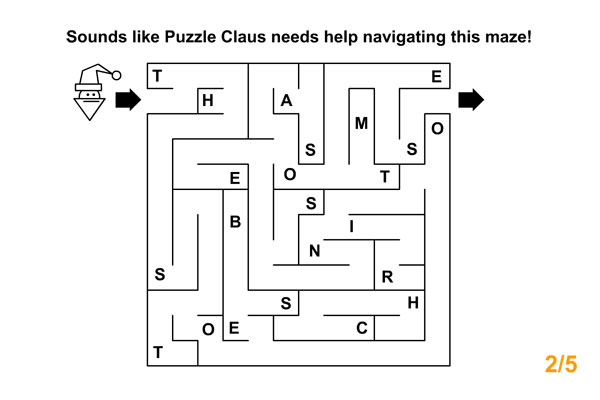 Her next puzzle was a very simple maze. The letters she picked up along the way led her to an envelope tucked under a speaker in the living room. 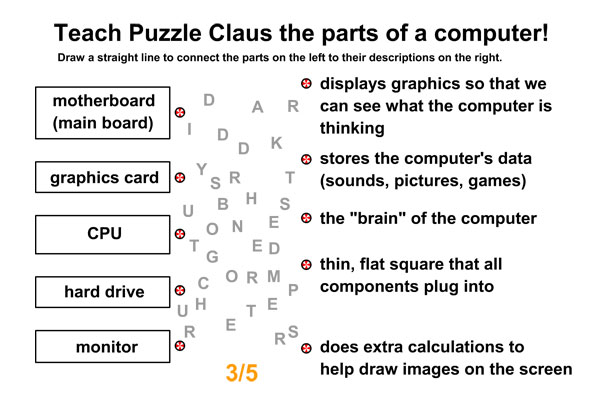 Izzy’s next puzzle tested her on the computer knowledge she learned a few nights ago when we were trying to rehabilitate one of the machines in our tech lab. After she drew the matching lines, the leftover letters that weren’t crossed off led her to the very machine we had cannibalized for parts. She had to unscrew the case and fish out her next envelope.

She found this puzzle frustrating, because if you don’t draw your lines accurately, you don’t get the intended answer. There was much foot-stomping and grumping by this point. 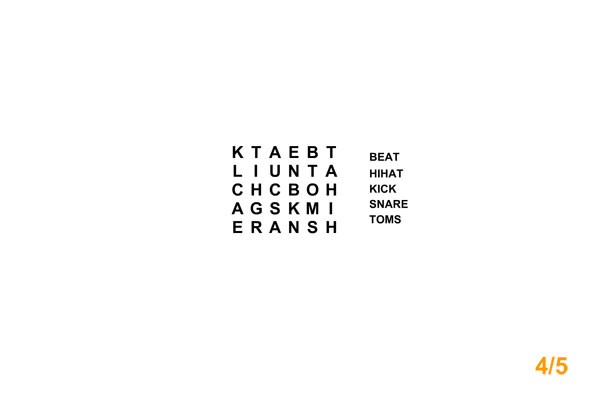 By the time she reached this point, she was in complete tears. “Why did you have to use these words?” she agonized. We had been renting an electric drum kit from the music store, but when i lost my job, i told her we had to return it to the store… but that Mommy and Daddy would work very hard to find a solution to get another kit back in the house somehow. 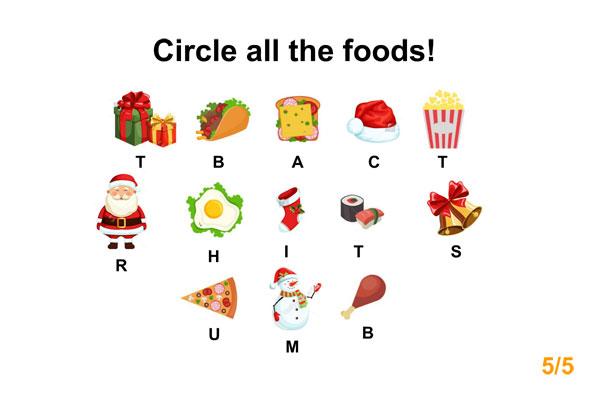 After Mommy coaxed Izzy out of her room following a mini-meltdown, she recovered the last envelope and solved the simple puzzle built with clip art Puzzle Claus stole from the internet. We had put one of our bathrooms out of commission because her gigantic present was hidden in the tub. We claimed that we were worried that uh… moisture from the shower was making the lights… like… short out. Or something. i even unscrewed the lightbulbs the previous morning to get the girls used to using our other bathrooms.

Izzy hoisted the gigantic box into the living room an unwrapped it. It was an electronic drum kit, naturally. 🙂

Being a few years older than her sister, Cassie’s puzzles were ever-so-slightly more challenging: 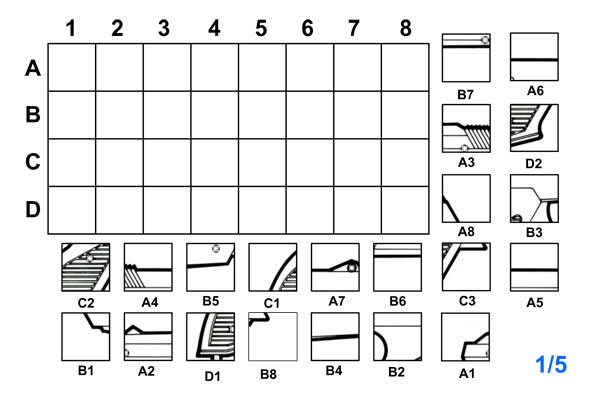 Cassie’s pic was a Nintendo zapper. i have one on velvet in a case downstairs (it’s kind of a joke no one seems to get, but i find it amusing). 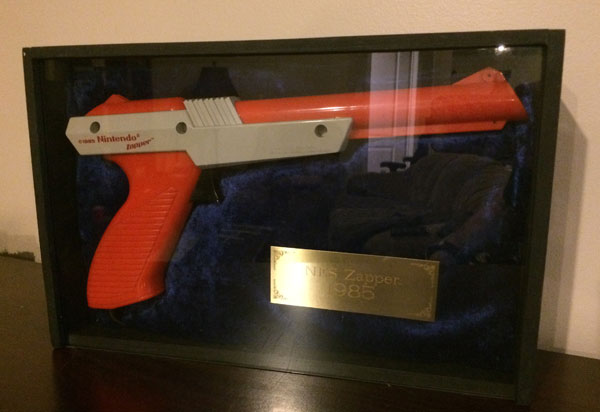 Her next envelope was behind the gun case: 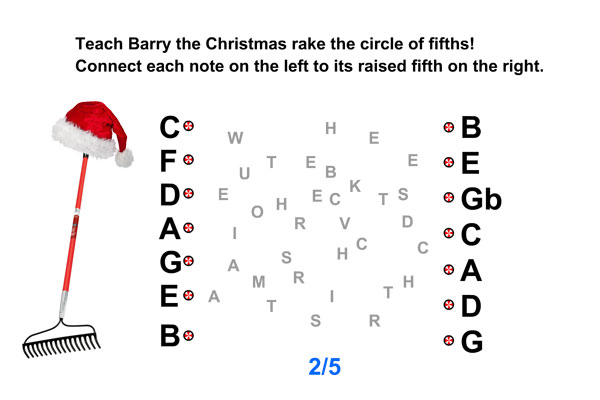 Barry the Christmas rake is bound to overtake Frosty the snowman in popularity by this time next year. You can count on it.

Cassie has been studying ukulele for the past year and a half, so she was easily able to complete the puzzle. Finding the answer from where the lines converged proved really challenging for her, though. This was the point at which Cassie reached her own peak frustration point. 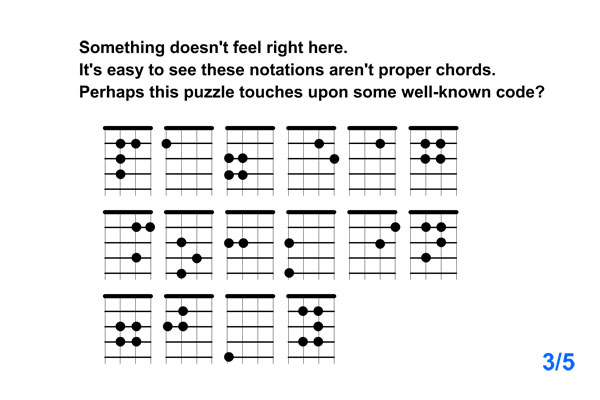 She retrieved her next envelope from behind the ukulele chord chart on our wall. In this puzzle, the flavour text (the text at the top describing how the puzzle works) contains three clue words (“feel,” “see,” and “touches”) suggesting that the dots on these chords are written in Braille. When she decoded the answer, it led her to a paperback on her bookshelf. 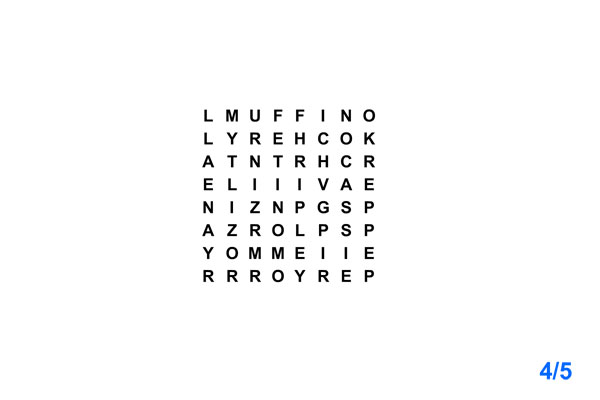 There’s no word list for this word search puzzle, but the name “MUFFIN” is easy to spot across the top. Muffin is one of our hamsters. The names of our other pets, and all of the humans who live in the house, are also hidden in the grid. The leftover letters led Cassie to a certain spot above the neaerby mantel. 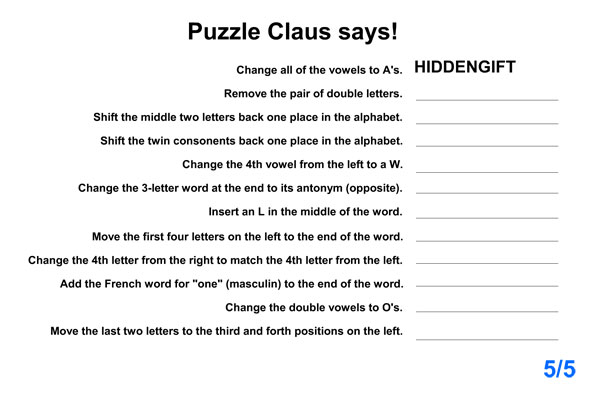 Cassie’s final puzzle was a Simon Says-type challenge. i had bought her a book of these a year ago to help her practice careful reading and following instructions. i had to help her with a few steps (and by the end, i wondered if Puzzle Claus had made an error here? Our answer was a bit misspelled, but i didn’t bother to see whether it was her mistake or his). At any rate, she found the hiding spot for her present above the washing machine, and was happy to discover it was the acoustic guitar she’d been asking us for for most of the year.

At some point, i’ll ask the girls again if they’d like to see Puzzle Claus return next Christmas. As i said last year, a simple puzzle scavenger hunt, provided it’s not too taxing, really slows the morning down to a digestible pace and builds anticipation in a really fun way.

Now Dasher! Now Dotter! Now Braille and Vigenere!
On Caesar! On Atbash! On Pigpen and Playfair!